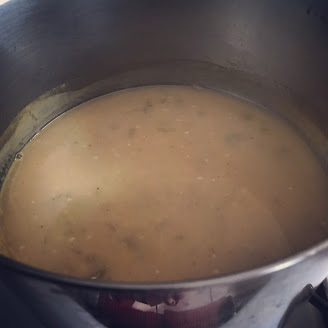 "White Soup" is referenced in my favorite novel, Pride and Prejudice, written by my Dead Best Friend I Never Met, Jane Austen. The character Mr. Bingley says when his cook has made enough of this complex Regency concoction, then he can issue invitations for the ball he's promised to host.

"...as soon as Nicholls has made white soup enough, I shall send round my cards." -Mr Bingley, Pride and Prejudice

The recipe for White Soup is long, complicated and not at all vegan. If I were a meat eater, though, it would sound delicious to me, with rich veal stock, almonds, and other exotic ingredients. As a vegetarian, however, it is not my cup of tea. Or soup, to be exact. 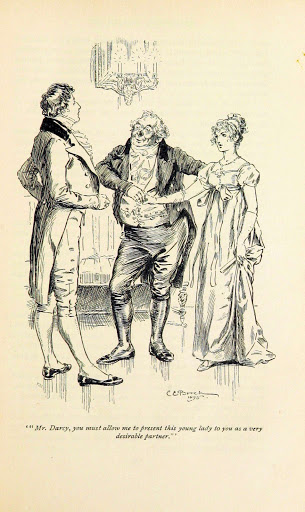 Still, the idea of a rich, delicious, hearty soup that's white in color sounded appealing to me. So I made this recipe up. While my recipe has no meat, it is still layered in flavor, built up in steps. Though not as labor intensive as Regency White Soup, it's medium in ease to make.

Cauliflower Puree Base
Add all but the water to an Instant Pot. Pour in the water over the cauliflower til just before it's covered. Affix the lid to the IP, and set for "Soup." Once the cauliflower is cooked (can use pressure release valve), use a hand blender or whatver else to puree the cauliflower. (If you don't have a "Soup" setting on you instant pot, I would say about 2 minutes in the pressure cooker could do it.)
If you don't have an Instant Pot, option 1: on a stovetop, bring to a boil then simmer over medium heat until the caulflower are very tender (1 hour should do it). Then puree.

If you don't have an Instant Pot, option 2: Buy cauliflower puree if your supermarket sells it in the vegetable or freezer aisle.
Soup Pot Ingredients
You can either set the puree aside in a different container and do this step in the IP, or switch to the stove top with a big sauce pan.
Over medium high heat, sautee til tender the celery, onion, and garlic in the evoo. Add the salt about halfway through the sautee process. Keep stirring occasionally.
Once the veg are soft, add the cauliflower puree, then the beans, lemon juice, and seasoning. Bring to a light boil then simmer for 25 minutes. Remove heat and let cool a little then serve.

Seriously, This Is Vegan?

The soup is so layered in flavor, it won't seem vegan at all. It's all plant-based, so very healthy. Not to mention not that pricey and really really yummy. It is actually is a great "summer" soup because it is all plant-based so it doens't have that "meat sweat" factor like a non-vegetarian soup.
I'm also a bit of a Vegetarian Soup Virtuoso. Former roomates, family, and friends alike rave about my soup making skills. The big thing is to build up the flavors in layers and in different ways. There's Liquid Aminos and later salt. A cauliflower base; chopped, diced, and minced vegetable that were sauteed; and beans just merely heated at the end. That sort of thing.
You can see lots of recipes and musings on foodie things in general, as well as vegetarianism and vegetarian cooking, at past posts.
foodie things Jane Austen notebook witch Pride and Prejudice vegan one pot recipes vegan recipes vegetarian vegetarian diet vegetarian recipes
Location: Providence, RI, USA