Reading Emily Dickinson's "Blazing in Gold..." for the Poetry of Science Unit 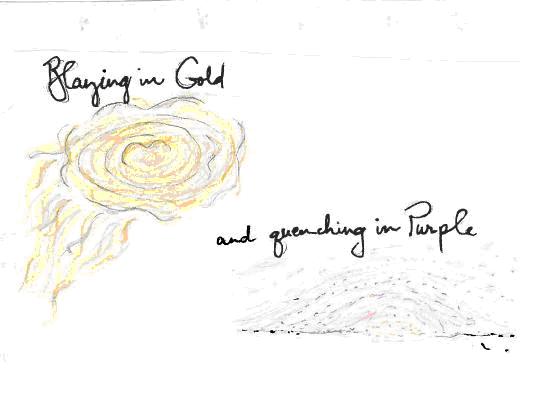 Studying an Emily Dickinson Poem for the Poetry of Science Unit

A great poem to read with young poets is "Blazing in Gold..." by Emily Dickinson. In the "Poetry of Science" unit, it is one of our first poems to study. It's full of vivid imagery, juicy words and interesting sounds, and it works well for a young audience as the poem itself is a kind of riddle.

First we read the text just as it is:

Then we talk about what we notice. It's kept pretty informal. I suggest they can think about images made in the poem, interesting words, length of lines, length of poem itself, objects mentioned, rhythm, rhyme. It's just a "noticing" exercise at first. We don't worry about "getting it" or not, or "meaning." or anything like that, to start.

Then I show them the illustrated version. (I made an illustration of this poem as part of my critical graduate thesis on close reading a poem.)
After that, we get into the "exterior" of the poem (What does it mean?) and also "interior" (use of literary devices like alliteration and personification, rhyme scheme).
Next we pick out our favorite "juicy words" from the poem--things like "quenching" and "otter"--and then we each create our own new poem using those words. The only rule for this exercise is that it cannot also be about the sun, like Emily Dickinson's poem. It has to be about something else altogether.