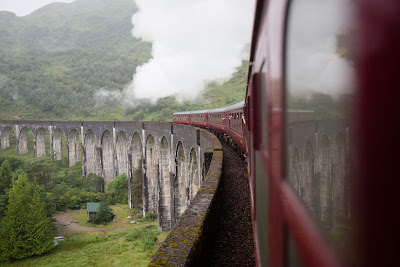 Actually what I mean is two "-trains" as in quatrains. From April 2011 to April 2012, I wrote a poem a day for the entire year. Since it was a Leap Year in 2012, that meant 366 new poems. This was also during the Great Recession, and to make ends meet, I worked 2, sometimes 3, jobs at a time. How did I manage working 6 days a week in the North Shore of Boston, South Shore of Boston, and MetroWest of Boston while living in the city of Boston and having shifts that started at 7:45am and ended at 10pm and still manage to write a poem a day? Well, obviously, I took my advice from yesterday about just getting something very un-perfect down. The other was to write to form: two quatrains. That's it. Write 8 lines of poetry.

I actually love this form. Often, I found that it becomes a very compacted mini sonnet. The thing about a sonnet, what makes it very sonnet-y for me at least, isn't the rhythm and rhyme so much as the build up, climax, wind down, conclusion, like a novel. The volta in the middle is the turn in the poem, often. So instead of doing that over 14 lines, I did it over 8.


So, here we go! A poems in 8 lines, to just get something done for the day and not feel overwhelmed. If it sucks, I can always revise or abandon.

Where are you going? Who did you see?
When you come back, wipe the door knobs
The fridge handle, the faucets, take
Off you shoes, leave them at the door, don't

Traipse the outside world into this space we
Have to share, I stay inside at almost all costs
That's what we're supposed to do right now
Stop risking my health and going out. Stay home. Stay home.