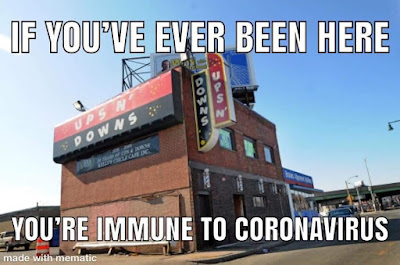 A sestina is a form of poetry in which you pick six words and in varying combinations, those six words must be the last word of a given line, for six stanzas. I had to write one for creative writing class junior year of college. I didn't like being forced out of my free verse ways. So, to be a twit, I chose six very inappropriate words.

It was a brilliant choice.

As I read it back to myself, I realized I was reciting it in my heaviest Boston accent. (Junior year of college, I still had a relatively heavy accent, though three years in Maine was making it less strong.) So, I went back into the poem and wrote it out in a Boston accent dialect. Thus I had created a daring, offensive, and—to my mind,  at least—hilariously over-the-top monologue.

I titled it after the legendary dive bar in this meme above. Ups N Downs was on the Dorchester/Quincy border. It was the first bar you could get to in Boston if you'd been out drinking in the South Shore and wanted to keep the party going passed 1am, when the suburban bars closed. It was, as the meme suggests, the ultimate in sketchiness. It was a glorious place. Unfortunately, it closed its doors a few years ago. It was the perfect setting for an extremely offensive Boston accent laden poem.

I was so young when I wrote it, but it's hilarity still gets to me every time. I'm impressed with my young self for it. My creative writing class, no lie, actually CLAPPED and WHOOPED and a few people even stood. Hahaha! It was awesome.

So, I bust it out sometimes. I don't know that I can ever publish in a legitimate literary magazine. It's so blue, it practically purple. But I love it just the same. And now I will share it here with you right now. But remember, it's naughty AF. You have been warned.

Ups ‘N Downs, Rte 3A, Dorchester: Drunk Sestina
The othah day I got wasted, I mean totally fucked
I puked in my friend’s backyahd but he didden give a shit
I said horrebel things t’ people, as if I drank liquid bitch
No one remembahd oah if they did, they didden give a damn
‘Cept that kid who weahs bad clothes, he called me a twat
But it duzzen maddah b’cause everyone knows he’s a fuckin’ dick
Speakin ‘a which, a friend ‘a mine claims he's got a big dick
I don’ think that’s true b’cause he’s such a lyin’ fuck
When I told ‘im so, he called me an evil twat
But we wah both jus’ jokin’, neithah of us gave a shit.
Once at the bah, this nasty chick walks by us ‘n he says, “Damn!”
Like she was good lookin’ but I know she’s just a skanky bitch
I met ‘a at the club down th’ street. The skanky bitch
Was hittin’ on my boyfriend. She wen’ up to him, felt his dick
Through his pants and smiled, then said, “Damn
You need tah gimme some ‘a that so we ken fuck
All night long.” When my friends told me about that--shit
Went down cause my man wasn’t goin’ neah that nasty twat.
Me and my friends coahnahd‘a in th’ bathroom en called‘a twat,
Skank, whoah, slut, cunt, douchebag, ho ‘n fat ugly bitch.
Then she stahded mouthin’ off tah us and so we kicked the shit
Outtavah.  When we wah done, no man wahnned tah put his dick
In such a nasty lookin’ ho. She looked like hell cause we fucked
Hah up wicked bad. She wasn’t goin’ neyah any man foah a while, that’s fah damn
Shoah. Someone said she might call th’ cops but I don’ give a damn
‘Cause I got connections and who kayahs about a fat-ass twat
Like her? But I almos did get in trouble cause this kid I know— stupid fuck—
Was tellin' his sissdeh the story and she’s a nosey trouble-makin’ bitch
Who gossips all the time. I was afraid she might tell Uncle Dick
Who’s a good guy but he hates hearin’ about ladies doin’ violent shit.
He was my dad’s bes’ frien ‘n duzzen’ like it when I get innah bad shit
He’s the only one that did stuff fah me, ‘cause my mum didden give a damn
My dad passed when I was little and made shoah that Uncle Dick
Would look out fah us. I love ‘im ‘cept when he calls my mom a twat
To ‘a face.  She can’t help it if she’s an alcoholic bitch.
But whatevah, y’ know, because, I mean, who really gives a fuck?
Swanyways enough of this shit. I gotta tell you about that twat.
Tuhns out my friend is a damn fool ‘n still went fah tha bitch
Gross. There's no friggen low too low for a dick who's tryin' ya fuck.
All Poetry Posts artsy stuff Boston humor NSFW poems
Location: Dorchester, Boston, MA, USA