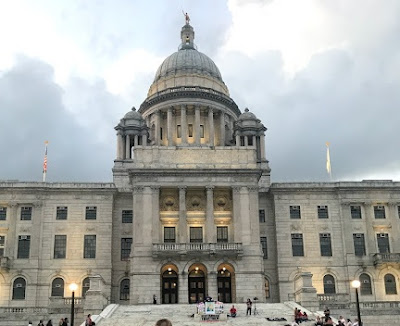 It shouldn't surprise me that when the two buffoons in charge of the Senate and House of the Rhode Island General Assembly finally emerge from their feckless hideouts, it's to talk about impending budget crunches, rather than, say, how the state legislators can take action to help Rhode Island residents in an emergency health crisis of generational proportions. https://www.providencejournal.com/news/20200323/ruggerio-mattiello-warn-ri-lawmakers-of-enormity-of-coronavirus-challenge-to-state-finances

Though not surprising, it's still angering.

I've always referred to them as "so-called leadership" because to my mind there's nothing leader-ly about them, except in the worst sense of the word—ruthless, greedy mini-despots willing to take power from every quarter they can grasp it from. And this focus on the budget and budget shortfalls instead of meaningful action from the legislative branch to help with the crisis not only proves my point, but also makes me wary.

Since he would never let an opportunity to exploit something for his own benefit, I'm sure the [current] Speaker is cooking up a way to funnel federal aid to another crony and himself. Maybe not the chiropractor but surely some other quack, maybe who sells quinine tablets or something. In all seriousness, though, the constant mention of the Disaster Emergency Funding Board is what is most alarming to me.

This board would be comprised of legislative leadership and chairs of certain committees, and they would be able to act unilaterally. Given the amount of exploitation the [current] Speaker has employed under his already-too-susceptible-for-corruption position, this would be the absolute WORST move for a fragile state in dire need of the best governing practices we can hope for during these intense and vulnerable times.

To the so-called RI state legislative leadership, if you're not going to emerge to talk about how you and the state legislative body can help the situation, just go back into to your flaccid mancaves while the real leaders, like Gov Raimondo and Dr Alexander-Scott, actually do the meaningful work of leading us well through these dire times.

Or, employ the talent and brilliance that I know the Rhode Island legislative body actually possesses in its best members. Stop scheming to exploit this situation. Start offering to help. Otherwise, go back to the obscurity where you've been and stay out of the way of the useful elected officials.