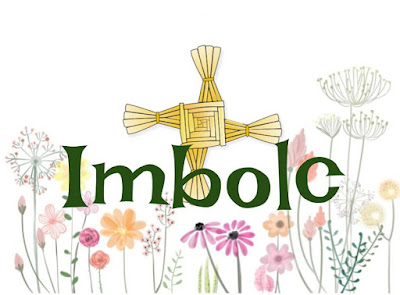 Celebrating the Festival of the Goddess Brigid and Saint Bridget's Day

When I was little, and could never ever find a souvenir with my name on it--yet all my Danielle and Jessica and Jennifer and Christine friends and family members could--I did not like my "old-fashioned" name.

Now I am SO IN LOVE with my ancient, powerful, very special name and feel like I was born to fulfill its magic. Thanks to my great-grandmother, my direct namesake, and thanks to my mother, for giving me this most excellent name.

Happy Imbolc to all who celebrate the Festival of the Celtic Goddess Brigid, or Irish Saint Bridget. She is the matron of poetry, smithing, medicine, arts and crafts, cattle and other livestock, sacred wells, serpents, and the arrival of early spring. Taking a look at Vintage Bridge: Arts and Culture Notebook​, it seems I cover all my namesake's patronages!

Happy Anniversary to Realizing I Am a Neo-Pagan

Friday after work we held our annual post-holidays "White Elephant Party." (Everyone brings "bad" gifts to swap.) It's a fun time to get together and talk about life outside of work.

I told everyone about how I have become an ordained minister through a non-denominational site called "Universal Ministries" so that I could officiate weddings for couples looking for either an a-religious, spiritual but non-denominational, or neopagan wedding ceremony.

I mentioned to my colleagues I was a neopagan, and that I got the idea to become an ordained minister when I was listening to an audiobook about neopaganism in which the author, Deborah Blake, had noted that she was an ordained minister with Universal Ministries so that she could officiate weddings. The author noted that if we were interested in doing this ourselves, we definitely should because there weren't enough people who were available for such weddings.

It didn't occur to me until I wrote this blog post how far I had come into my acceptance and openness about my spiritual practice since I first discovered neopagan is what I am. I don't think I would have imagined talking so openly about my religion, or spiritual practice as I like to call it, with my co-workers, when I first started to realize what that spiritual practice was.

One of my friends whom I've known since kindergarten wished my a happy Bridget's Day in 2012. (BTW I have: 6 friends from kindergarten, 1 from 3rd grade, 1 from 7th grade, 2 from 8th grade, and 2 from 9th grade who I am still good friends with and see yearly/seasonally/monthly and talk to anywher from daily to weekly to yearly. #blessed yall!)

Once this friend messaged to say Happy Bridget's Day, reminding me it was my "saint's day" I decided to look it up on the good ol' Wikipedia. The entry about the Irish Saint Bridget also mentioned the Celtic Goddess Brigid, and that the saint was probably syncretized with the goddess of the same name.

Then I went down a click-hole about the Triple Goddess Brigid, the Celtic festival of Imbolc, and the neopagan sabbat of Imbolc. The more I read, the more these stories and explanations and observances spoke to me. The more I learned about the different spiritual practices that observe this celebration, the more I realized that what I was reading about was...what I was, what I am, what I had always been--but didn't have the right words, the right language for, until that moment.

I had known some neopagans. The then-director of my MFA creative writing program, Annie Finch, is Wiccan. I think there were some people from high school and college who were as well. However, I hadn't really known that many people who were.

On that exact day 8 years ago today, I had finally found the things that had begun to make sense to me when it came to religion, or what I like to term as "spiritual practice." The beliefs espoused in the information I was getting about neopaganism were almost exactly what I had always believed myself. However, it took a few years to come to terms with not being a "very liberal Christian," as I had previously thought of and described myself as.

People often don't like labels because they feel they are constricting, but I do not feel that is always the case. A lot of times labels are useful because they help one get to the language they need to describe the given thing they're looking to talk about.

For my part, I call myself a pantheistic neopagan who observes the Celtic Pagan Sabbats. I am an eclectic kitchen witch of sorts, and I am a solo practioner. To break that all down for you, it means that I believe there is a spirit and that it is in all things: animal, mineral, plant, etc. As a neopagan, I do appreciate and in fact venerate the syncretism modern paganism accepts as part of spiritual practice (as in combining and making new, rather than a dogma of any sorts). The Celtic Pagan Sabbats are on the seasonal and mid-seasonal changes throughout the year. As a solitary, I don't belong to a coven, I simply practice on my own.

Being an eclectic kitchen witch means my spiritual practice entails everything and nothing particular, except mindfulness and a willingness to learn, observe and contemplate. I have a crystal ball, crystals, shells, wands, an altar, oils, herbs, teas, tinctures, powders, and lots and lots of books. Plus my own poetry and other creative endeavors. Between, from, and within all of that, I infuse my spiritual practice.

Where to Learn about Neopaganism

I like to listen to audiobooks of non-fiction neopagan and spritual mindfulness authors. I just finished "The Goddess Is in the Details" by Deborah Blake. I would count Christiane Northrup's "Dodging Energy Vampires" in there as well, even though she does not seem to have a definitive religion. The big big book, which I am now on Chapter 18 of the audioversion of (after getting through 1/3 reading it since I purchased it in 2013) is Margot Adler's "Drawing Down the Moon." Next on the list is Starhawk's "Dreaming in the Dark."

Contemporary books that are interesting explorations of modern neopaganism are Lisa Marie Basile's "Light Magic for Dark Times" and Deborah Castellano's "Glamour Magic." And I'm about a third of the way through Carolyn Elliot's "Awaken Your Genius." You might even call Marie Kondo's "The Life-Changing Magic of Tidying Up" a modern pagan book, as she was a Shinto priestess and her ideas come from the philosophy that there is an energy to ourselves and our things that we should be conscientious about.

I also have Amy Cesari's "Planner for a Magical Year" for 2020. You can read it and color it and use it as a journal or planner. I am using it to note if I'm doing my 15 minutes a day (or a weekly equivalent thereof) of spiritual practice.

I'm also reading "The Book of Crystal Healing" by Liz Simpson and "Crystal Ball Gazing" by Uma Sibley. As well as books on permaculture, herbal medicine/medicinal herbs, crystals and crystal properties, tarot, hand-fasting ceremonies, and just general mindfulness and empowerment, as well as the all important shadow-work. -- Which doesn't mean invoking anything dark or sinister. That is so far from how I "roll." It just means that you acknowledge the down sides/dark parts and work through them--as opposed to suppressing them with toxic positivity.

I mean, the poets whom I have always loved the most totally have witchy vibes. Emily Dickinson--hello? And Sappho. As well as my two favorites from the Black Mountain school, Robert Duncan and my beloved John Wieners. And then of course my poetry MFA director and (eventual) creative thesis advisor, Annie Finch. The clues were already there--I just had to have a special day to start mindfully putting it all together.

A Triple Force of Celebration


So! On each Imbolc, it's a triply special day, a Triskelion of Personal Specialness, you might say. Not only is it a Celtic holiday, but it's particularly the saint's day/goddess day from which I get my name. And then it is also the anniversary of the day I came to better discover who I am and what, exactly, my spiritual practice is. So, it's a really special and powerful time of year for me.