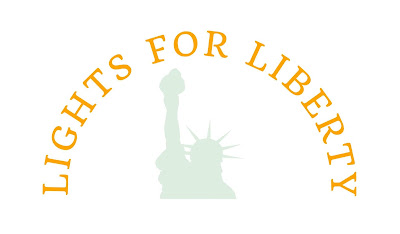 
On Friday, July 12 beginning at 7pm, at over 500 locations world wide, Lights for Liberty: A Vigil to End Human Detention Camps, will have people gather together to protest against the human rights violations occuring at immigrant detention centers. https://www.lightsforliberty.org/

In Rhode Island, we will gather at the steps of the RI State House for an illuminated vigil and protest. We will join others across the nation for a moment of silence at 9pm on Friday, July 12.

This is event is organized by Rodrigo Pimentel, David Veliz and Bridget Eileen.

NOTE: We cannot use candles at the State House, but we can do an illuminated vigil, using things like the flashlight function of phones, or similar types of small lighting devices.


Details for the Lights for Liberty Rhode Island Protest and Vigil

Other Actions You Can Take Right Now

We want this event to be a catalyst for further action that people can take regarding immigration rights, and not just a singular event that people attend. With that in mind, here things you can do right now (more suggestions welcome!):*Get in touch with local immigration organizations to see how you can help their causes.

About the Lights for Liberty National Organization


Someone on Facebook asked me "What human rights abuses?" So I posted many many links, because I always bring my receipts. I'm sure it didn't make a difference to the poster, but it was compelling to me, to sit down and think about all the many horrific stories I've heard.


Toddlers quarantined in a 8x10’ room sleeping on the floor w/the flu.

Young girl in a hot warehouse coloring with a chain link fence around her.

Women sobbing in a crowded cell because they were separated from their kids.

‘There Is a Stench’: Soiled Clothes and No Baths for Migrant Children at a Texas Center - https://www.nytimes.com/2019/06/21/us/migrant-children-border-soap.html

The Cruelty Is the Point: President Trump and his supporters find community by rejoicing in the suffering of those they hate and fear - https://www.theatlantic.com/ideas/archive/2018/10/the-cruelty-is-the-point/572104

‘Children Were Dirty, They Were Scared, and They Were Hungry’ - https://www.theatlantic.com/family/archive/2019/06/child-detention-centers-immigration-attorney-interview/592540/

Trump's family separation policy never really ended. This is why: At least 700 more families have been separated since the administration said it was ending its inhumane policy. - https://www.nbcnews.com/think/opinion/trump-s-family-separation-policy-never-really-ended-why-ncna1025376

Trump’s Immigration Strategy Is Dumber and Crueler Than Anyone Realizes: The president has reportedly been fantasizing “in graphic terms” about migrants impaling themselves on a spiked border fence - https://www.rollingstone.com/politics/politics-news/trump-immigration-border-strategy-cruel-dumb-836585/

How Stephen Miller made immigration personal: The White House policy aide has involved himself in specific immigration cases and pressed to publicize more personal information about migrants. -
https://www.politico.com/story/2019/04/22/stephen-miller-immigration-trump-1284287

ICE is supposed to consider service when deporting veterans. It hasn’t been. - https://www.militarytimes.com/news/your-military/2019/06/12/ice-is-supposed-to-consider-service-when-deporting-veterans-it-hasnt-been

DHS Office of Inspector General releases report on "Dangerous Overcrowding and Prolonged Detention of Children and Adults in the Rio Grande Valley." Conditions "represent an immediate risk to the health and safety of ... those detained." - https://twitter.com/ReichlinMelnick/status/1146109945236086784?s=20
'Help': Photos show hundreds of migrants squashed into cells, appealing for assistance One senior manager at a facility called the situation a "ticking time bomb." Migrants banged on cell windows and pressed notes against the plexiglass. - https://www.nbcnews.com/politics/immigration/help-photos-show-hundreds-migrants-squashed-cells-appealing-assistance-n1025831

Pod Save America "Dems in Disarray!" Episode, featuring interview with Warren Binford, attorney who visited the detenion center at Clint, TX. Hear her firsthand report of the conditions the migrant children face in teh camps. It's devastating. The interview begins at 61:20.

One Sunday in mid-June, I was at home in my summer stretchy soft clothes, dawdling in a Sunday kind of way while listening to some political podcast or other. They were discussing the human rights abuses at the immigration detention centers. Then I remembered I'd heard about a national--and now international--protest against human rights abuses at the immigration detention centers, AKA US concentration camps. I found more details at the Lights for Liberty webpage and checked to see if anything was happening locally in Rhode Island. Nothing was set up yet. I mentioned the international movement to have a vigil on July 12 in a large Facebook Messenger group I was part of with a lot of other progressive politically active people. Many people noted their interest in attending a vigil, too. I waited for someone to take up the cause of having a Rhode Island Lights for Liberty event but no one was, and then I realized that, since I'd brought it up, it was actually up to me.

I have never organized a protest before. I have attended many--in college, during the Iraq War. Never made it to Occupy Boston, though, because I was--ironically--busy working three jobs at the time. I attended hte Women's March in Boston and the March for Our Lives in Providence. And recently I was at the Rhode Island State House in support of the passage of the Reproductive Privacy Act.

And though I have never organized a protest before, I have--and am in fact in the middle of--organizing a huge 3-day poetry festival in Boston, the Boston Poetry Marathon. So I am aware of the work that goes into putting on a big event, but not a political one. So, I just sort of...went for it. I created the page. Invited people to attend. Made posts on the page asking for assistance from others who had more experience. Made call outs asking for migrant-centric organizations to help co-sponsor the event, since their expertise in the area is important in informing the event. Asked for advice and referrals in DMs. Brainstormed lists. Created and sent emails. And now here we are. There are two other co-hosts for the event. We have two local policiticians, a clergy member, and some activists willing to speak, and we will get more. And 1000+ have RSVPed to the event, and I hope more.

I don't exactly know what I'm doing, but it's amazing to me that when you're doing something very meaningful and good--a lot of things just come together. There's so much that needs to be fixed. There's so much that needs to be done. But at least we can do one big thing together to show our outrage, our intolerance for such policies and actions done by this despicable administration. It's only one thing. But I hope it makes a difference.