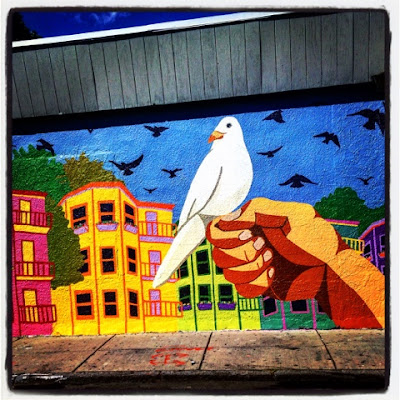 Murals of Boston: "A Bird in the Hand Is Worth Two in the Bush" featuring a Dove and Classic Boston Triple Deckers, as formerly seen in Roslindale, near Forest Hills

This pretty new mural was up from about 2014-2017 in Roslindale, on the corner of Archdale and Washington, near my old house. In fact, the green triple decker there looks similar to my old place!

It's part of the Mayor's Mural Crew: teen artists from Boston who volunteer to paint murals throughout the city. I watched an enthusiastic group of teenagers paint this as a summer project during their summer vacation. I love the brightly colored triple-deckers in the background in pretty pink, bright yellow, neon green, turquoise green and purple. The one behind the hand looks similar to mine!

The mural is inspired by the saying "a bird in the hand is worth two in the bush," which is apparently a popular saying in Domincan Republic. The neighborhood in which the mural is displayed has a dense Dominican population.
https://en.wiktionary.org/wiki/a_bird_in_the_hand_is_worth_two_in_the_bush

A little feature on the mural at Universal Hub:
http://www.universalhub.com/2015/one-mural-roslindale-nears-completion-another-one

See all the Vintage Bridge: Arts and Culture Notebook posts from the "Murals of Boston" on-going series here.