A Review of Jane Austen's Mansfield Park - a Play, Adapted for Theatre by Jon Jory (Plus My Further Explorations of the Novel) 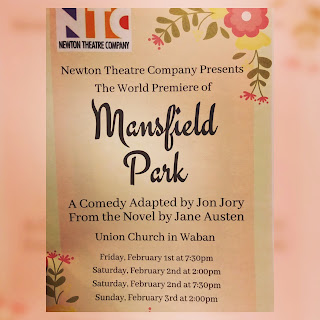 What happens if you remove one of realistic fiction's most compellingly hateable, bullying, grifting, pathologically mean villains from the plot of a story, when you adapt a novel into a theater script? Or when you passover the subversive message in a novel that does what it can during authoritarian times to critique one of hisory's most egregious social institutions? You get a pleasant, sweet romcom as a play. Is that okay? Sure. I LOVE a good romcom. Especially if the acting is magnificent and the staging is practically impeccable.

With minimal technical workings, the Newton Theatre Company's production of Jon Jory's adaption of Jane Austen's least contemporarily reviewed novel, Mansfield Park, is a delight. I like a good delight. There's tension between the characters. The actors play their roles well. With just a bit of rearranging of simple set pieces and some smart but strategic sound and lighting, the audience is quickly taken to upper-middle class Regency England and its somewhat foreign manners of courting. It is a pleasant way to spend a Friday night, seeing this play. And, though significant characters are omitted, like Aunt Norris and Thomas Bertram, the ones we do see are as compelling and relatable in the play as they are in Jane's* novel. (*I get to call her Jane, instead of Miss Austen, since she is my Dead Best Friend I Never Met, for the last 14 years and going.)

Yes, there is a but here, now that I've assured you seeing the play will delight you.

But, on the heels of finishing Dr Helena Kelly's "Jane Austen: The Secret Radical" and her deep dive into the contemporary reception of this novel--and what it REALLY tackles in its darkest depths, it's hard not to be more than a little...I don't know, dismayed? To see Jane's work adapted to only its sweetest "his & her romance" aspect.

Because, guess what? This novel, ultimately--with its significant side plots about romance (as seen in the play) and bullying snobs (as viscerally discerned from one's first reading and encountering with Aunt Norris)--this novel, as Dr Kelly explains it in Secret Radical, is about one of the most significant issues of history. One that reverberates and permeates everything about contemporary life. Mansfield Park is a brutal critique of the evils of slavery.

The Late Show with Stephen Colbert, Brought to You by Jane Austen

I've always contended that were she alive today, the scathingly sarcastic, bitterly witty, almost cuttingly sardonic Jane Austen would be Stephen Colbert's head writer. He has mostly women on his writing staff, so it would make sense. And whether it were the satirical Colbert Report, or the ascerbic monologues and comedic bits of the Late Show, Jane would have been THE human to spearhead the influential, profound, didactic comedy of today's late night television.

However, she wrote in a time of stark authoritarianism. Like Stalin on the shoulders of his composers, she was not able to explicitly state anything, given the political climate of Regency times. Mail was opened and monitored and censored. Or worse, you were tried for what you wrote and shared, if it were deemed treasonous.

Given this context, if one wished to condemn the evils of slavery--which context clues of the novel show us Austen did (and you can read Dr Kelly's eye-opening chapter on Mansfield Park in Secret Radical for the specific details)--you'd have to do so as artfully as possible. You'd have to couch it in a novel seemingly about manners. Same thing if you doubted the equity of the institution of marriage. Or questioned the piety of most members of the vicarage. None of it could be as explicit as a Colbert monologue. It'd all have to be dog-whistled to the Left.

And the message, it seems, was received contemporarily. In my introduction I mentioned that Mansfield Park was Jane's least contemporarily reviewed novel. Dr Kelly contends, and I agree, that this was because the instituions of the time heard that dog whistle, and they rejected such rebellion. To assert so, the reviewer of her past work, a man in the pocket of the Prince Regent, happy to uphold the conservative culture of the times, passed over reviewing Mansfield Park. With so few reviewers at the time, this was de facto censorship. Thus, the novel never received the same critical acclaim as her other work during her lifetime.

...Thus nowadays, it can be adapted to what a nominally aware audience expects from what they "think" a Jane Austen story is a about: manners and romance.

I Recommend You See the Play, If You Can

I don't begrudge this adaptation and this performance its glaring absence of anything remotely dark or critical. There's a time and a place for everything and the adapter of this play decided to create a romantic comedy. There's value in the balm of a romantic and funny little escape, especially when reality can be so stark.

What I was left with, though, after all was said and done in this fun little production, was a desire for an adaptation that focused on the most controversial, and important, aspect of the novel. I want a production of Mansfield Park that seizes the critique of slavery and amplifies it. I think we need that more than anything, in these times.

"Mansfield Park: a Comedy Adapted by Jon Jory from the Novel by Jane Austen" performed by the Newton Theatre Company: Fri, Feb 1, two shows on Sat Feb 2, and at 2pm on Sunday, February 3, 2019 at the Union Church in Waban, Newton, MA.