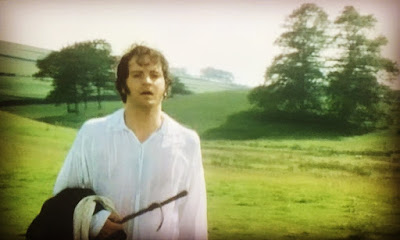 What is up with us* and our obsession with Colin Firth as Mr Darcy in his Wet White Shirt? Sigh. I don't know. Is it really worth asking, or can't we just be like Bridget Jones and just [get ready for a pun] soak it in, especially during our blue times?

*Us = legions of obsessed women, even though this miniseries came out in 1994 and the book was published in 1813 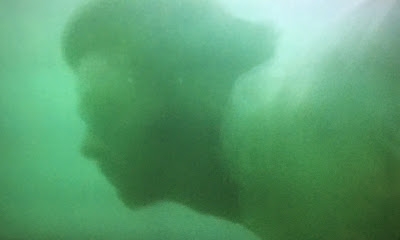 Even though this was probably the stunt double, or if not the stunt double, was Colin swimming in a tank on a sound stage in London, let's pretend instead is a slightly sweaty Mr Darcy, still brooding over his unrequited love for Elizabeth Bennet, jumping in the lake like he owns the magnificent mansion and grounds, because he does.


We love it because it's SO REPRESSED yet full of SEXUAL TENSION far more than anything explicit could dream of being like.

Also because Colin Firth has this way of walking that is extremely sexy. He swings his arm out a lot and each step in his gait is very cool yet non-chalant. It's the sexiest walk on the planet. (I am unapologetically biased in this opinion.)

The thing is, while Colin First is a compelling and attractive actor in so many roles he's had, this one steals our hearts the most because of one reason: Jane Austen created it. And if anyone in the history of the English language is going to be good at making you love someone who isn't real, it's Jane Austen. She is the virtuoso of character development, and the people (er, I mean characters...) of Pride and Prejudice are her masterpiece.

This is why I finally started the Boston Austen Book Club. I had been talking about it with a fellow Jane Austen fan for ages, and last winter, we had our first meeting. We read "Sense and Sensibility" annotated. Since then we've discussed the "Pride and Prejudice" spinoff by Jo Baker "Longbourne," as well as an annotated "Persuasion," and a series of short fan fic called "Dancing with Mr Darcy." We only meet once a season, so it's a more manageable schedule

The next book is "Jane Austen, the Secret Radical." My copy arrived earlier this week and so far I'm loving it. Those of you who are aspiring writers, especially if you are a woman facing a stupid man's stupid rejection of your work, please note that the first publisher who had rights to what eventually became Jane Austen's book "Northanger Abbey" told her it was worthless, and that she was a silly woman with no talent. And no one in the world remember his name, and everyone knows hers.