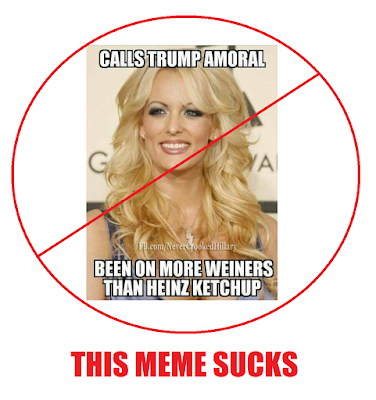 Stormy Daniels Deserves as Much Respect as Any Given Person, Regardless of How She Makes a Living


I saw this meme in a thread about Rudy Giuliani's comments about Stormy Daniels and whether she deserves respect or not.

"The business you were in entitles you to no degree of giving your credibility any weight," Giuliani said of Avenatti’s client. “Explain to me how she could be damaged. I mean, she has no reputation. If you're going to sell your body for money, you just don't have a reputation. I may be old fashioned, I don’t know."

This meme only applies to those who think there's morality inherent in any given consensual sexual act. I do not.

It's against my spiritual practice to do so, in fact. Within paganism, there is no inherent morality to any given sex acts in their absolute form between enthusiastically consenting adults. So whether you're an actor and producer in the adult film industry, or a stripper, or a prostitute, or just a plain old Blanche Devereaux style slut, none of those actions are moral or immoral, in their absolute form, according to my belief system.

And let me just say two things: 1) I hope the posters of such memes are just as judgmental of the morality of anyone who has consumed porn, as they are of those who make it, otherwise, their hypocrisy is showing. And 2) It is amoral to consider a human being is due no respect, even if the thinker thinks the actions of said human are immoral. Even our laws afford criminals the respect of due process and freedom from an imposition of cruel and unusual punishment. If you're going to be biblical in your judgments, never forget that bit about "let he without sin cast the first stone."

But I'd urge everyone who subscribes to tenets in the Abrahamic faiths, or even if they're not religious, who still hold the social views on sex that are at issue in those religions, to deeply question the sense (or lack thereof) that sexual acts between adults who are enthusiastically consenting should have any morality applied to them. If you think about it, logically, there is no good reason for such a thing. It's a learned thought-process and one that the world would be much better served by ridding itself of, in favor of concentrating on more practical and logical tenets that actually prevent harm, like doing unto others as you would have done to yourself, or loving thy neighbor
current events neopagan notebook witch Politics religion faith spirituality sex work activism sex workers stormy daniels