1) What is a close reading? (definition generated by group)
2) What are the elements of a poem?

“Blake’s opening line, ‘O Rose, thou art sick,” which supplies – in its formality of diction and syntax, in its choice of pronoun, in its relationship of stressed and unstressed syllables, in its dance of long vowels and hard final consonant – access to the sensory and cultural information latent in the concrete noun, to the attitude in the observation (that is, tone) and to something very like a kinetic response to pitch, timbre, tempo and inflection…But ALL OF THIS contributes to the texture of the line. The hardest aspect to translate, texture is the easiest to alter in one’s own…To a large extent, it is the poem strand by strand – not the “context” but the text itself as it is apprehended.
2b) Structure - FL p.124

“…structure is the way all the poem’s materials are organized…”


“If we can distinguish as ‘form’ the arrangement of texture in a poem to create pattern, recurrence, symmetry, harmony, and unity; and as ‘structure’ the organization, the architecture, ‘so full of strain and tension’, of a poem’s textural materials; then perhaps we can end the residual conflation of terms…”


“A shopping list, recorded chronologically, has an order of sorts, one item following another, but lacks pragmatic structure unless reordered and organized…”


“…I’d like to complicate and realign, proposing analysis by function rather than substance…”
------

Illus #1 – Definition of parts of a poem, after reading “The Flexible Lyric” and illustration 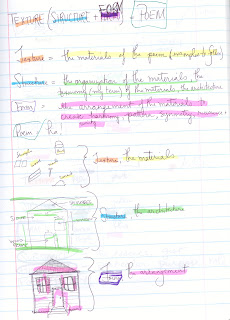 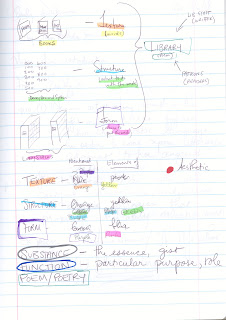 2f) Energy - from “Notes on Poetics Regarding Olson’s Maximus” by Robert Duncan (not assigned reading), p. 68-69


“…conception cannot be abstracted from doing: beauty is related to the beauty of an archer hitting the mark. Referrd to its source in the act, the intellect actually manifest as energy, as presence in doing…”
2f) Energy - from “How to Read” by Ezra Pound (not assigned reading), p. 25, 23


“…language is charged or energized in various manners…” --and--
“Great literature is simply language charged with meaning to the utmost possible degree”
Energy is the presence in doing within a poem.
------


“[a contemporary critic defines poetry as]… ‘a convention, within which and against which, the poet orders his individual poetic movement,’ reacts throughout against…a music in the heart of things that the poet sought.”
2g) Spirit – IMF p. 95


“But in the vitality of poets, of Marianne Moore or of Robert Lowell, some personal necessity rather than social opportunity gives substance and meaning to their conventional verse. The rigorously counted syllables, the certainty of end rimes, the conformation of stanzas arise along lines, not of a self-imposed necessity but of a psychic need.”

2g) Spirit - from “The Truth and Life of Myth” by Robert Duncan (not assigned reading) p. 38


“…in my poetics I let go of striving to claim some authenticity for the poem in itself and give its authority over into a universal authenticity that arises from the store of human experience acknowledged in the language that gives whatever depth to my own experience, a feel of form acknowledged in its inception to be no more than a feel...”
------

3-all) What makes a poem “good”? – Harmony & Tension: Some of the many types of questions to consider

• Do the various elements come together?
• Are the parts talking to each other?
• Does the poem work towards the motto of Ezra Pound to “make it new”?

4a) Close Reading – As a Reader

takes care everywhere before names
this taking over of sand hillock and slope
as naming takes over as seeing takes over
this green spreading upreaching thick
fingers from their green light branching
into deep rose, into ruddy profusions

takes over from the grey ash dead colonies
lovely the debris the profusion the waste
here – over there too – the flowering begins
the sea pink-before-scarlet openings
when the sun come thru cloud cover
there will b bees, the mass will be busy
coming to fruit – but lovely this grey
light – the deeper grey of the old colonies
burnd by the sun – the living thick
members taking over thriving

where a secret water runs
they spread out to ripen


4b) Close Reading – As a Writer: Developing a personal aesthetic

o What moves me when I read a poem?
o What excites me?
o Conversely, what do I want to avoid doing?
o What turns me off?
o What bores me?
o And, most importantly, what kinds of poems do I want to write?
o What kind of poet am I?

4c) Close Reading – As a Teacher: exercises, quotes, philosophy
'Blazing in Gold...' by Emily Dickinson
Blazing in Gold and quenching in Purple
Leaping like Leopards to the Sky
Then at the feet of the old Horizon
Laying her spotted Face to die
Stooping as low as the Otter's Window
Touching the Roof and tinting the Barn
Kissing her Bonnet to the Meadow
And the Juggler of Day is gone

A man can learn more music by working on a Bach fugue until he can take it apart and put it together, than by playing through ten dozen heterogeneous albums.-- from “How to Read” Ezra Pound (27)

Fictive Certainties by Robert Duncan
Literary Essays of Ezra Pound by Ezra Pound, edited by T. S. Eliot
Reading Like a Writer by Francine Prose
The Flexible Lyric by Ellen Bryant Voigt
The Art of Reading Poetry by Harold Bloom
Literary Theory: a very short introduction by Jonathan Cutler
Teaching the Art of Poetry: The Moves by Baron Wormser and David Cappella 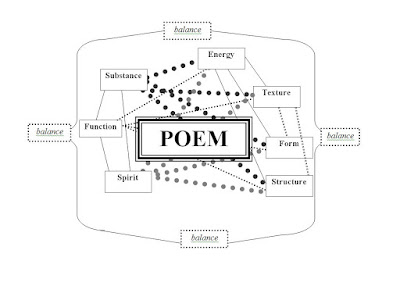