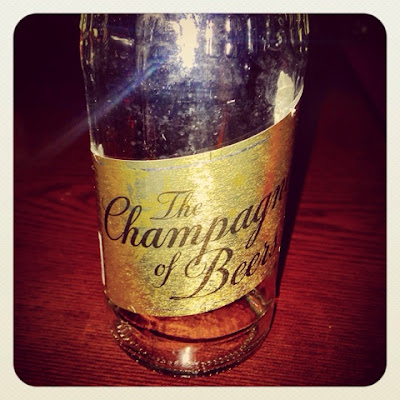 Sometimes I want to spend less or I'm actually just too full on the yummy craft beers so I'll move on the to drinking Miller High Life--with a lime. I pour it in a glass and squeeze a lime wedge in. really tasty. I've been doing the "poor man's Corona" since 2004, when I switched from a full-time salaried job in education to a part-time one so that I could concentrate on grad school for creative writing. Those were very very very lean years. I wasn't even in grad school yet! I was putting together a portfolio and trying to make a good future plan as a writer. Anyway, the Champagne of Beers was so so so cheap--the cheapest beer at the convenient store near me in war far away Pittsfield, ME where I was living for free as a housesitter. I just thought, "they put lime in Corona and it tastes so much more palatable that way. Why not try it with MHL?" And my favorite cheap beer drink was born. I think a lot of other people have caught on to this trick. I ordered it in NOLA a few years ago and the bartender is I was friend with so-and-so and I was like, "No, why?" "Because she orders that and also calls it a Poor Man's Corona." Weird, eh? Anyway, try it sometime. It's extra tasty when it's really hot and you're drinking out on the porch or something.
bohemian budget cheap beer foodie things miller high life with lime