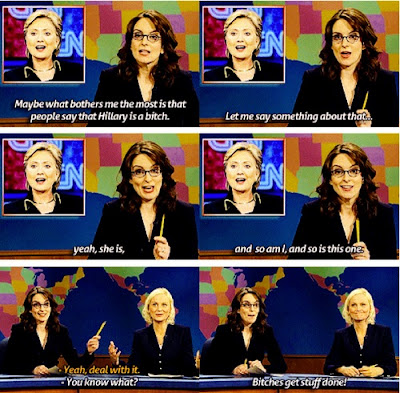 I'm ready for the first woman President and I want it to be Hillary, with all my heart -- not just my head.

Joan Walsh wrote a resounding endorsement for Hillary Clinton in an op-ed piece at the Nation. It was invigorating for me. I am a super hippie lefty liberal. I even dabbled with the Green Party in my college days. I've admired Bernie's socialist speeches, advocating for radically progressive views, throughout his tenure in the Senate. But I want Hillary to be President.

I contemplate why often, with so many of my friends, family and peers supporting Bernie. I cannot point to just one reason for my support for her over the rest. First and foremost is that she's the most qualified person to have ever run for the job. Credential like hers are unparalled. She wasn't just a First Lady. She was a highly active and politically involved FLOTUS. This is what made me first love her, but what I know prompts critics to discuss her likabilty factor (more on that later).

Secondly, she isn't a socialist but she's damn lefty, as reported on FiveThiryEight (my imaginary gay husband, Nate Silver's, website).

Thirdly, though this isn't the most important factor, she is more electable. Much as it would be nice, we are not a majority socialist country. We're pretty much left leaning in the middle. Once this primary is over, converting and convincing undecideds and independents to join Bernie's socialist agenda isn't feasible. Consensus building, compromise, collegiality -- we need those in the next President. It won't come from our fiery friend Bernie, not that I don't love him for his ornery passion.

But finally, and most important, I have always loved and admired Hillary. I suspect I'm not the only liberal female who straddles the cusp of Gen X and Millennials who feels this affinity for Hillary. As we were coming of age, just beginning to have an age with two digits and a conciousness about things like social justice, equality, and feminism, who was our beacon? Who was on the daily TV coverage and magazine covers as the most prominent female? Who was attacked relentlessly for not being as docile and domestic as her Republican predecessors? Our Hillary, of course. She was the face of the Intelligent Woman Who Fought for What She Believed In and Thus Was Labelled a Bitch. Something I was starting to experience myself while coming of age and being like her: a female with opinions and, worse yet, a drive to voice them and do something about them.

How I cringe when I hear the talking heads, or sloppy smarmy young dopes at Town Halls, talk about her "likability factor." It's code for, "Too many people still hate when smart bitches crack a glass ceiling, and you've smashed a million so people really hate you." Oh, yes. How dare she get tough, do what needs to get done, and be unapologetic about it. So very unlikable.

It won't end sexism and it won't obliterate the patriarchy in one fell swoop. But how glorious is will be when the notion comes to fruition that you can be a vocal, adamant, intelligent, outspoken and a woman and *have the work to your favor* to the point where you're the most powerful human on the planet.
artsy stuff commonplace book feminism hillary clinton liberals Politics