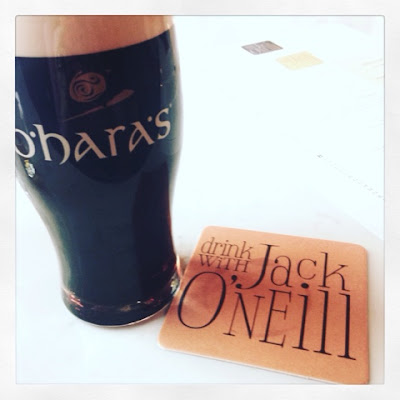 This is a new pub and restaurant that opened in West Roxbury on Centre Street. It used to be the old West Roxbury Pub, which had a very divey feel and I quite loved it. They had dart boards and karaoke and the old cozy pub atmosphere. This new place is much brighter with a very open, crisp and newly renovated look, with the drop ceilings removed and the high exposed ceilings and white paint instead.
When I went on a Saturday afternoon there were still a bunch of Irish guys watching the football match, though, so clientele isn't radically different. A lot of families came in for late afternoon lunch as well. I didn't have food, though they have a good looking gastopub menu with a modernized Irish cuisine slant.
The Chef, Denise O Neill, "is a Graduate of the world famous Ballymaloe Cookery School in County Cork as well as being a Graduate of Dublin Culinary School of Pastry Arts (DIT)" so it sounds like a promising adventure in food. Makes me think of PBS's Rachel Allen and Kevin Dundon.
They have a great beer selection. I obviously had the O'Hara's stout. We tried a blind taste test with Guinness and O'Hara's. I could tell a difference but guessed one was the other!
Anyway, if you're in the West Roxbury area, the new pub has a very different feel from the old pub but is a nice place to visit, even without the dartboard. The hadn't expanded the restaurant and bakery yet but they were workign on that. Those who remember the West Roxbury Pub will recall they had a restaurant, bar and function room. Looks like Jack O'Neill's aims fo rhte same.
I jus thope have the still live Irish music on St Patty's! Good memories!
https://www.facebook.com/jackOnCentre
Boston food trucks guiness stout irish pubs jack o'neill's ohara's stout travel West Roxbury