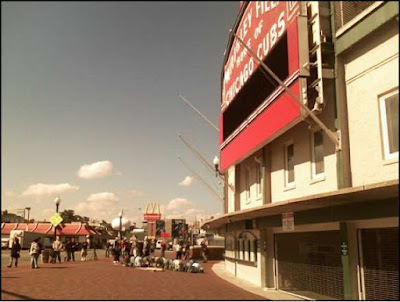 I love #Chicago and I love #TheoEpstein. And I love an underdog story, and one hundred and seven years since your team last won a World Series definitely makes you an underdog. Like, a lot. So I'm really rooting for the Cubbies this year. This is a picture I took in 2008 when the Cubs were playing the Dodgers in the National League Division Series. They were in LA, but a group of Muslim Chicagoans had gathered for afternoon prayers to Meccan for the Cubs. LA won the series that night so my joke was "Whether ya call 'em Yahweh, God or Allah, he clearly hates the Cubs." Or maybe it takes 7 years for prayers to get to Mecca from Chi-town. Anyway, I just love how very "only in America" this photo is: Wrigley Field, McDonald's, tourists, press, Muslims praying for a baseball team. Yep. Only in America.
chicago chicago cubs muslims praying for the cubs sports theo epstein travel wrigley field