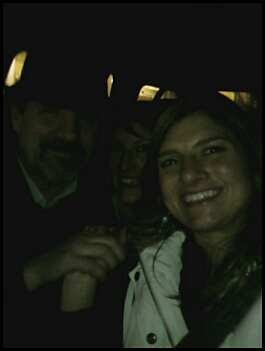 This is a picture of me, my roommate and John Pankow, who played "Ira" on "Mad About You". This is evidence of one of many many reasons why she is the person I do the most screwed up things with. We met him when we went out to celebrate the beginning of our roommate-hood. He was in Boston for a costume fitting for the movie "Bridal Wars". We chatted with him all night then went out for sushi in Chinatown. We accidentally missed ended up at Logan first but got back there, then went by Fenway before dropping him off at his hotel. He was a nice fella and talked about his daughter and how he and his wife were about to send her off to college and all that good stuff. It was fun. Other weird things we have done include feeding the dog steroids, which we are doing contemporarily because she has a pinched nerve, and spending 32nd birthdays as if they were 23rd birthdays. Even before we were roommates, we had little adventures. Like the time we traumatized my sister by bringing her to Ups N Downs in Neponset on her 21st birthday.
30 days of pictures artsy stuff commonplace book creativity and creative practice