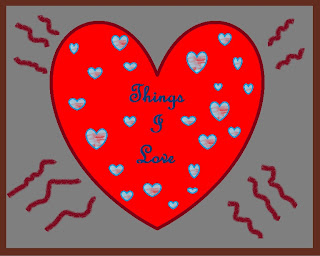 Here's some things I'm loving the heck out of these days:

#WhatShouldWeCallPoets tumblr - This blog is just the best. It combines my love of humor, the contemporary poetry "culture" so-to-speak and pop culture (referencing everything from Jersey Shore to the new Sherlock to LolCats) and delights me on a daily basis. I'm not sure who runs the site, but I wish we were besties. http://whatshouldwecallpoets.tumblr.com/

Regretsy.com - if you don't know Regretsy, I'm sorry for you. First you have to know about Etsy, the site for handmade artists and crafters (allegedly that's who it's supposed to be selling there, things are as they should be, unfortunately). "Helen Killer" AKA April Winchell runs the site. Her vicious wit and unfailing humor expose the creative quackery found on Etsy, and on other sites, and exposes the frauds with such stark humor. God, I love this site. Please, while you're there, don't forget to read the comments. It enhances the experience to another level. Important: most of the site is NSFW ... http://www.regretsy.com/

David Nokes's mammoth Jane Austen biography "Jane Austen: A Life"- The Amazon review does the trick, so rather than reinvent, here it is:

It's refreshing to get such a passionate and contrarian account of Jane Austen's life, though the book's emphasis on thwarted emotions and family misdeeds will undoubtedly displease the more traditional-minded of her admirers. David Nokes, a prominent scholar of 18th-century English literature, views Austen as "a wild beast" (her phrase) transformed by well-meaning relatives into a demure spinster through wholesale bowdlerizing of her letters and personal papers. Nokes's narrative doesn't tell us anything new, but by stressing Austen's ambition and acerbity, he offers a welcome alternative perspective.

Anais Nin - this is not new to me. I have been picking up and dabbling in her work ever since I inherited my Uncle Dominic's books collection, prominently featuring Henry Miller and Anais Nin (along with yogic and communist literature--Uncle Dominic was ahead of his time and cool as shit). I recently picked up Anais Nin's erotica book of short stories called "Little Birds" because I was annoyed by all this "50 Shades of Grey" business. I mean, I haven't read that series yet (ever?) but why bother when there's Henry Miller and Anais Nin books to read instead? Please do: http://www.amazon.com/Little-Birds-Anais-Nin/dp/0156029049/

And on a completely different note--I'm talking 180 degrees here--I'd like to point you to my collection of 3rd grade inspired comics, created in the last couple years while working at the primary school and just having fun with the curriculum. http://www.scribd.com/collections/3683128/Third-Grade-Inspired-Cartoons Look for a new one inspired by ocean birds, coming soon! (Ohhh ahhh)
All Poetry Posts Anais Nin artsy stuff Books commonplace book humor Jane Austen Music Regretsy writing