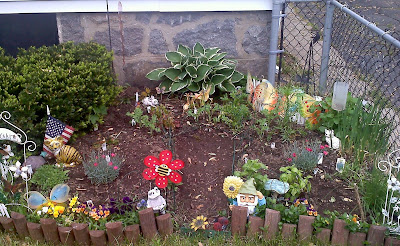 The daisies, sunflowers and English garden mix are from seed. We will see how that goes.

For the English garden mix, I learned my lesson from last year. Last year I spread the mix seeds over just one patch of the plot and there were tons, too much, in that area. This year I spread it out to two patches on either side of the keyhole, further from the inner border. I am trying to keep the edible plants close to the inner borders so that I can easily harvest them. 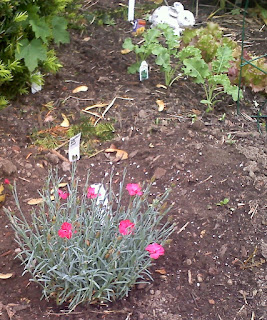 The dianthus, a red variety called frosty fire, was one big plant which I divided in two. I put them in the same position on either side of the keyhole, further to the outer borders.

I planted the sunflowers along the front outer corner. Those spaces get the most sunlight and when the stalks grow nice and tall it will look great to have these two posts of sunflowers on either side punctuating the garden.

The daisies I planted in the back LH corner. I don't think the phlox is coming back, but just in case, I planted the daisies around where the phlox would be instead of right on top of them.
Here's what coming back nicely so far: the Russian sage, fragrant sumac, thyme, chive, scallion, lemon balm, hosta, violets, and periwinkle. My very aggressive Morning Glories are invading everywhere, but they're from the Bronx (New York Botanical Garden) so that's to be expected.

The basil and lavender I just planted look good, as does the red lettuce and the violas. Some violas from last year hopped the fence and got into the lawn. I dig them up and transplant them to be with the other violas. So instead of just orange, orange purple and purple, which I planted this year, I have blue, white and yellow from last year which reseeded int he lawn.

Crossing my fingers the dahlia & the sage are returning, though it doesn't look good for the sage. I will plant some more right next to it, maybe that will encourage them? I doubt it.

I planted irises along the shrubbery. I'm not sure what has happened to them. I would still like more sage, rosemary, cilantro, mint, and some other edibles. I would also like to look into some low maintenance colorful perennial.

So to date, here's what I have or have had in the garden: 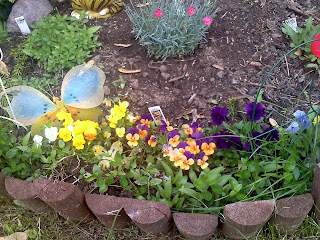