Don't Call It a Comeback, I Been here Fah Yeerz - Poetry Is Everywhere 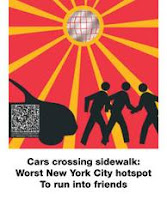 I will not say that poetry is making a "comeback" because somethign has to go away before it can come back. And I don't think poetry has ever or will ever go away. But I am seeing it pop up in more public places.

A couple month's ago, it showed up in a Target mailer, in the form of a coupon book called "Haikupons" which I wrote a post about.

There have also been commercial about Citizen's Bank in which "Alexander Hamilton" reads his poems about banking. Ezra Pound would be so proud.

I'm particularly tickled by the "slam poetry" style poems from Coors Light. It's a series of commericals in which poetry slam participants come up with clever rhymes in loving odes to ice cold Coors.

But the piece de resistance has been featured this week on both Rachel Maddow's "Best New Thing in the World" and at NPR: haiku traffic signs. The signs and haiku are actually very clever and artfully done. I am appreciative of the functionality and aestheticism of the series of 12 traffic signs commissioned by NYC Dept of Transportation. And I love that poetry is popping up in places where one wouldn't normally expect it.
All Poetry Posts artsy stuff Citizens Bank poems commonplace book Coors Light Slam Poetry haiku haiku traffic signs not so literary observations Target writing