Why Was There Such a Large Uprising in Egypt? 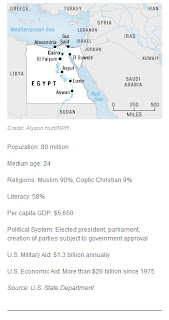 NPR's Morning Edition did a series on the state of things in Egypt in November of 2010. The reports show what is was the protesters were so fired up about. Listen to any of the stories in the series and it gives you a better idea of the impassioned desire of the people of Egypt. The everyday Egyptian had to deal with huge disparities of wealth, rampant corruption of government officials, a police state that acted for the dictator and not to serve and protect the people, dictatorial regimes, homelessness or substandard housing, etc.--for decades upon decades.

I have seen some amazing, on-the-street, live reporting of the uprising itself in Egypt for the past 3 weeks. However, I haven't heard much in-depth reporting on the specifics of what had driven the masses to protest.

These stories give some of the "why" to the story.

Nov 23 "As It Shifts, Egypt's Economy Retains Some Oddities"

Nov 26 "Will He? Won't He? Egypt's Voters Focus on Mubarak" [Note: The answer is HE WON'T!!!!!]
artsy stuff commonplace book egypt NPR