Day 28 - A picture of something you're afraid of 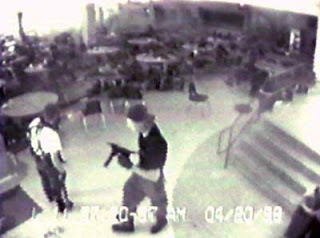 Above is a picture of the Columbine shooters because I am afraid of crazed gunmen. Yesterday, one came to the college that I work at, with a loaded semi-automatic weapon and a clip with 18 bullets. He was caught before anything happened, but it's so unsettling, especially considering how soon after the community college crazed gunman shot up the meet and greet for Rep Giffords. It's a fear that runs through my head often, since I'm the only staff in my area of the building at night, so it is a fear that haunts me. It's pretty sickening that that is just something that comes with the territory of working in education these days.
30 days of pictures artsy stuff commonplace book