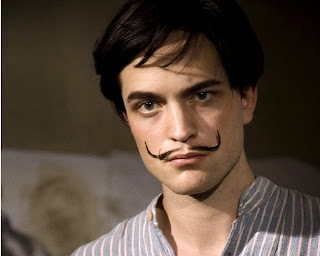 Side Note: the file name of this image is "Team Salvador"
because I am a dork
I did a keyword search on Netflix for "poet" and the movie Little Ashes starring Robert Patinson as Salvador Dali and Javier Beltran as Federico Garcia Lorca was suggested so I watched it today. I fell asleep during the first time I played it on my computer and, fittingly, it invaded my subconscious. Damn, that was cheesy to say. But it's true! And now I have thought some stuff and have Ideas which I won't go about spoiling them but announcing them before I've done anything but there you go.

This movie is good. Not great, but good. Could have been a little shorter, I think. I am amazed at how much the actors look like their real life counterparts though. The only one that was off was Pattinson, but he played his role well. Don't misunderestimate this teen heart throb. I've seen him in other roles, little indie flix like this one, and he did a god job. There should probably be life after Twilight, which I don't think many of his co-stars can expect.
Back to the movie, though: definitely check it out if you're a fan of any of the artists portrayed or the movements they represent. It is worth it.
All Poetry Posts artsy stuff commonplace book fererico garcia lorca little ashes movies and film poets writing