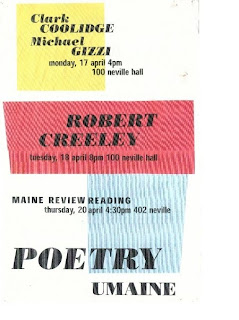 When Michael Gizzi, Clark Coolidge and Robert Creeley came to UMaine during the week advertised in the poster above, it was 2000. That was my (first) senior year of college. Their visit was an Event for the English department. In addition to the readings, Steve Evans and Jennifer Moxley had a shindig at their house and invited the English faculty, area writers and some of us older students. My friend Joe came with me wearing a cropped lady's fur jacket and his long curly black hair in a Samurai type ponytail on the top of his head. I talked with our verated visitors, my fellow students and my professors all night long about all sorts of wonderful English and non-English related things. It was the first time I had ever gone to an event like that, a party whose attendees were there because we all had the commonality of an interest in writing and reading. It was so much fun.

Michael Gizzi died yesterday. He was very young, only 61. Poeple are stunned and saddened, and I'm included, even if I'd only met him that one time in 2000 and again very briefly last year when Bill Berkson came to Cambridge to read. He was very easy to talk to, I felt, and just really nice. Not to mention a damn good poet.

I found out about his death through a Facebook post from Jim Behrle. Jim also made a post on his blog, which had a link to these poems, which are very good poems, by Micahel Gizzi:
http://www.sienese-shredder.com/3/michael_gizzi-poems.html
All Poetry Posts artsy stuff commonplace book writing