Harry Belafonte - Smoke Gets in Your Eyes 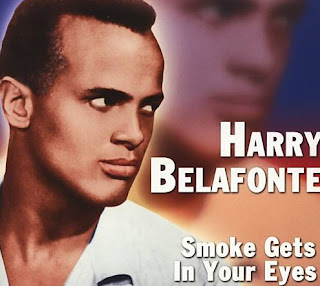 I have been listening to Harry Belafonte's "Smoke Gets in Your Eyes" album often as of late. I picked it up, at all places, at Christmas Tree Shops, two summers ago. I uploaded onto my iPod but haven't much listened to it until now. It's such a fabulous album!
Now, after watching so much Mad Men, it evokes scenes from that show as I listen, because of its late 50s/ early 60s feel. This particular album I purchased isn't listed in the wiki discography. I think it's a compilation of the least expensive songs, put on a collected songs. It was only something like 2 dollars...
My favorite is "La Bamba" which starts out as a soft ballad on this album, then goes into the traditional sound we're so familiar with from Richie Valens and. or Los Lobos (Los Lobos for me, as a child of the 80s). http://www.youtube.com/watch?v=9gKpjjiqhL0
Speaking of "Richie" named rock stars, there's also "Sometimes I Feel Like a Motherless Child" on this CD.
I would recommend purchasing a different Belafonte CD than the one I have as this one has mislabeled all the titles of the songs. However, Belafonte is my recommendation for a retrolisten.
artsy stuff commonplace book harry belafonte Music