on April 24, 2010
I think many of us are interested in the myth and facts of Mary Magdalene because we are starved for a multidimensional female figure within the Bible. 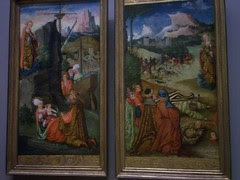 That she was shunted to the penitent woman and then the penitent woman was conflated to being a whore, well, that sucked, to put it bluntly. And the Catholic church retracted this notion it put forth but they did it after centuries of perpetuating that conflation so that most Catholic texts still insist that she is the penitent Mary, sister of Lazarus and Margaret. 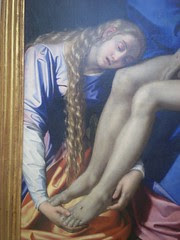 Dan Brown's lovely cotton candy hot mess of a purple prose novel -- and I say all that with the greatest of affection, for I did have a lot of fun reading the tall tale -- The DaVinci Code, rescued her from that line of pentitent whore but then put her into another mythical place as the lover of, wife to, and mother of Jesus' children, of which there is little to no evidence to support. 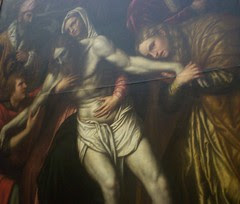 What does exist for certain is what is now considered an apochryphal text called the Gospel of Mary Magdalene. For some reason, I thought to bring my copy, by Jean-Yves LeLoup, to New York with me and read from it on the way there. That's why, when I got to the Met, I ended up turning part of my time there into a scavenger hunt of sorts in the European paintings section. I took many photos of paintings that featured the Magdalene. Just as the authors of the Preface, David Tresemer and Laura-Lea Cannon had studied many (far more than I had) references to her in art. 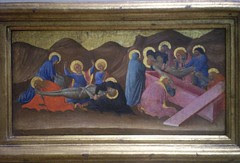 She gets to have a place here in the online creativity notebook because she is an inspiring figure. A woman of significance with the role of healer, friend, confidant, and reformer whose (honestly Buddhist-like) practice of introspection has always been a significant feature, whether from those that think of her as the penitent whore, or the wife of Jesus, or just simply his "bff" (best friend forever!). (In Catholic, erm, "mythology" she is known to have escaped persecution by surviving on a boat to France where she prayed in solitude in a cave for many years -- like Buddha on the Lotus Flower.) 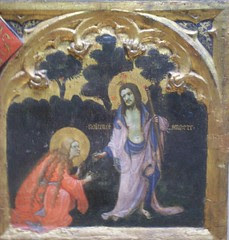 This introspection is more than just going inside for that sake of oneself or for creativity. It is for the better, higher goal of Truth. Like what I read from Robert Duncan, who also had read and was inspired by Gnosticism, including the Gospel of Mary Magdalene. Not to say that art or poetry or anything that comes from this gnosis has to be didactic for the ideas of Gnosticism, but I think good art comes from a natural connection to the idea of being a vessel for helping to reveal what is True. (I got that notion from Duncan, actually...) The prrof, as they say, is in the pudding, because look at the resulting artwork...Read the resulting poems of Duncan...they are striking things because of this tapping into the constant frequency of Truth.
More photos of my scavenger hunt at:
http://www.flickr.com/photos/7853928@N08/sets/72157623922000250/
All Poetry Posts artsy stuff commonplace book mary magdalene poets robert duncan the metropolitan museum of art writing