on June 26, 2009
When the report was still just a hospitalization, I posted a blog entry saying I hoped it wasn't true, but, tragically, it is. Michael Jackson is dead.

This is so strange to think about. I don't really believe it yet. And yes, he was a really wacked out person, but I loved his music. It's funny how music can move you so much, even though it comes from someone who perpetrated some very morally questionable behavior. But my, does it move me.

I remember when I was 5 and 6 years old, how much I worshipped Michael Jackson. That's when I knew 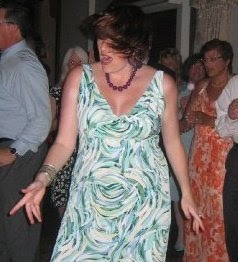 I wanted to be an artist of some kind. He inspired my imagination and my creativity. I had a red jacket and a white glove and I would play my Thriller tape on my purple plastic tape player stereo and dance and sing for hours on end. My Thriller tape actually broke because I wore it out.


Later, in college, my recreation of Beat It, from lying on the couch, to looking over kitchen counters, to breaking up a pretend dance-y knife fight, was quite the party trick. At weddings, I grab a gentleman's coat and pretend to be Michael, with the tiles lighting up under my feet (so I like to think). And when I taught middle school and high school, I kept the end-of-class Friday chaos under control by having Dance Party Friday for the last five minutes of class, if everyone was good for the first 75 minutes, and then showing off my Michael Jackson moves. Nothing endears you to a group of high school kids like the willingness to be a total and utter dork in order to keep them from bouncing off the walls. And they loved it, so they've said.

Last night, to commemorate this artist whose work meant so much to me, I stayed up listening to his songs and other 80 pop dance tunes (thanks to the "Thriller" station on Pandora.com radio) and dancing the night away into the evening. I hadn't had so much fun in ages.

So, yeah. Yeah, he was definitely a freak. But, my oh my, was he a musician, was he a genius, the likes of which we won't being seeing anytime soon, I don't think. and I'm sorry to see such talent and inspiration go. I hope his troubled soul is at rest.
artsy stuff commonplace book in the pines michael jackson Music