What do you think of the name Erasmus? 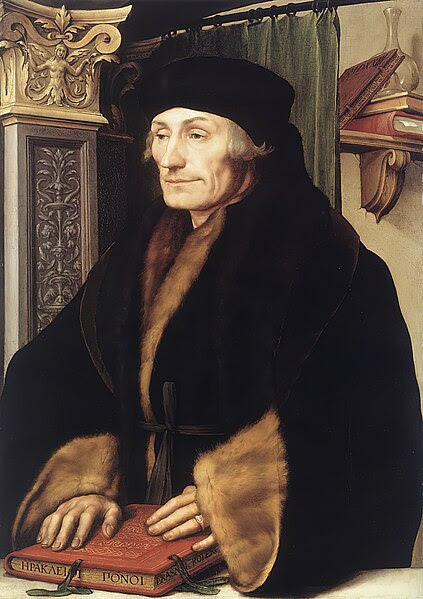 I like that name a lot but I'm bound to think of Click and Clack's production staff. You know, the head of the working mother's department "Erasmus B. Dragon".
I'm thinking of that name because Erasmus was one of Henry VIII's tutors in childhood. (A tutor of a Tudor! Ha!)
Apparently, like his daughter Elizabeth, Henry was "wicked smahhht" as we say around here. No surprise.
He was also very cunning. He is, of course, a Cancer (June 28). According to my Birthday Book, "cunning" is a trait amongst cancers. However, if our cunning goes unchecked, or we are aware of how persuasive we can be, very bad things can happen.
I think Ann Boleyn would agree. And the Catholic church. And Katherine of Aragon. And Bloody Mary.
Erasmus's sobriquet (my new word of the day...) was "Prince of Humanists". He took the middle road between the Protestants and conservative Catholics, pissing off both ends of the spectrum regarding Free will vs Predestination. (To put it in 1990s vernacular: Mrs Gump's box o' chocolates or Lt Dan's Plan. Der...)
Humanism in the 1500s "described a curriculum comprising grammar, rhetoric, moral philosophy, poetry and history as studied via classical authors. Humanists mostly believed that, although God created the universe, it was humans that had developed and industrialized it. Beauty, a popular topic, was held to represent a deep inner virtue and value, and an essential element in the path towards God."
I was inspired to write this post based on the Alison Weir book I posted about yesterday
artsy stuff commonplace book history humanism in the pines Tudors