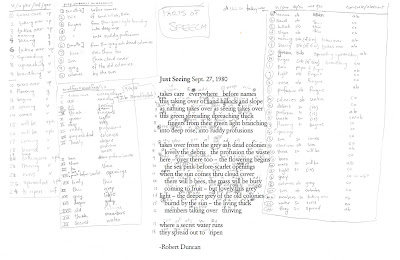 (click to enlarge then hit the back button to return to post, or, right click to open in new tab/ new window)
The words are the basics, which is why I looked at them singularly first (illustration 3). I identified what part of speech each word was. This exercise of the picking up of each tiny piece and examining it closely showed me how significant seemingly insignificant words can be. Is “when” in the tenth line an adverb or a conjunction? How does that affect the poem? “When” is a conjunction in this instance. That is structurally significant because it is a turn in the stanza – and the use of “when” is a textural marker of the start of the turn in the poem. After the conjunction “when” the verb tense shifts to future tense.
I also looked at the attribution of words to one another: the prepositional phrases and attributions, the verbs and their subjects, the modifiers and the words they modify. The nouns and whether they are subject, and to what, or objects, and of what.
The mystery of the poem is remarkable considering that of the 31 nouns and pronouns, only 13 are abstract, the others concrete. One would guess that mystery comes from using more abstract words, but that is not the case. The mystery in this poem comes from the prepositions and their attributions to other words. The first preposition “before names” is attributed to an unidentified thing. Later, the phrase “from the grey dead ash colonies” is also unattributed. The action of the unidentified “thing” is to both “takes care” and “takes over”. Between those two key places in the poem the mystery of the poem is generated.
All Poetry Posts artsy stuff close reading of poetry commonplace book in the pines just seeing poets project robert duncan writing