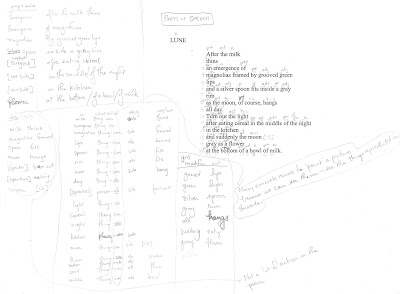 The poem “Lune”, and many other poems by Kimberly Lyons, has the harmony of elements that make a successful poem. The first thing that attracted me to this poem were he surprises in the turns of lines. Unlike “On Marriage”, I am not confounded with each twist, just intrigued. How is it that this poem is successful at its twists? When I closely read the poem for parts of speech (illustration 8), I noticed that twelve of the seventeen nouns in the poem are concrete. The many concrete nouns paint a clear picture because, as I read it, I can easily visualize the things represented in the words, even though the mix of the nouns is unusual: milk, magnolias, lips, spoon, moon, light, cereal, etc.
All Poetry Posts artsy stuff close reading of poetry commonplace book in the pines Kimberly Lyons project writing