on December 18, 2008
In light of my becoming a "Manizer" (like Britney's "Womanizer", only with men as victim and me, the female, as predatory perpetrator), Nan cy got me the following for Christmas: 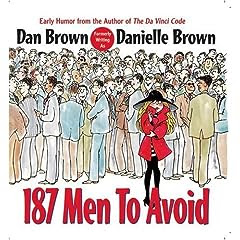 187 Men To Avoid was written by Dan Brown (yes, THAT Dan Brown) during the early 90s under the pen name "Danielle Brown" and has some funny tid bits of advice on types of men to avoid, like:

Men who swallow goldfish
Men who use spritz, mousse, or gel (There goes the prospects in East Boston!!!)
Men who are too cool to dance

and 184 more!!! We had fin reading through it before N left for the night. I forgot to bring her gift, which is hilarious and sitting in the dining room. After Christmas, I guess, since we're on break until Jan 20!