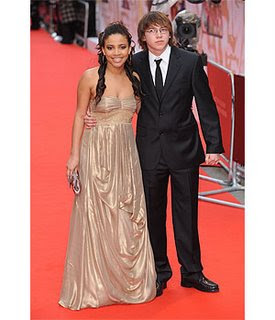 Holy tell-it-like-is show. Skins is the gritty, more earthly-bound answer to the loftiness of teen dramas like "The OC" and the new "90210". Each episode focuses on a guy or girl in this large group of friends at what I think is called a "sixth form school" also called a college. In England, you go there from age 16-18 and then start university at age 18/9. So, they're ages 16-18 and they're at this school and they're a group of friends. They party, they drink, they have sex. Their parents are missing, or leave them, or neglect them. They are Muslim, black, gay, slutty, nerdy, druggies, etc. The music teacher loves the assistant principal guy. The psychology teacher is sleeping with the druggie kid whose mother abandoned him and whose father disowned him. The social studies teacher tried to hook up with the psychology teacher when they took the kids to Russia for a trip. The Muslim kid was almost killed after losing his virginity to the young Russian woman who he thought had an abusive father but actually had an abusive husband. The gay kid had the popular kid (actor who was the little nerdy kid in "About a Boy") try to hit on him while the popular kid's girlfriend was passed out and she saw them hooking up so she dumped the popular kid and started dated some other guy but the popular kid did this wicked thing to try to get her back and it didn't work because she was sick of him cheating in her with all types of people--younger girls, gay boys, etc. The down-to-earth black girl has a missing mother and a famous hip hop artist mogul father who criticizes her for being a good clarinetist because it's the white man's music. Her name is Jal, and she's my favorite character. Sid is my second favorite.

So, there you go. Who needs Seth and coke-head Mischa with her terrible acting, or a reprise of Brenda and Kelly bickering amid unbelievable opulence? I'll take my new, good, fir-rear high school--sorry, 6th form--drama, Sundays on BBC America.