on August 07, 2008
...started with finding a poem I didn't like. I just picked out the most recent issue of Poetry magazine, back in June, flipped through, not looking at names, just flipping, and landed on a poem that made me go, "Blauchhh." 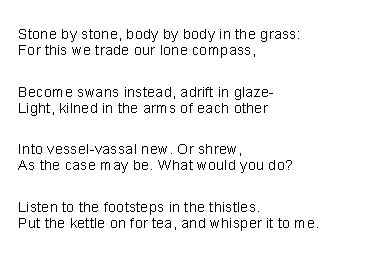 "Sweet heavens!" I thought, "How the eff did this get in here?!!!" And have been pondering that ever since.
One person I know who read it gave some solid, particular criticism, which I will quote here:

Corrosive indeed. Well, maybe that's a bit dramatic but one really shoudl be strident when it comes to certain things, like genocide, climate change and bad poetry.

I would love to put this in as a workshop poem and see the reaction. List of things that would be said about it:

stupid enjambent at "glaze-light" plus glaze light and kiln makes muddled image. The kiln makes glaze. The light of the kiln doesn't make the glaze. The heat does. But you're in the glaze-light. But before that you're swans. Then you have arms. You are swans with arms melted together from a kiln's light.

That get's us to teh next line with its RIDICULOUS rhyming. It's like rhymed for the sake of rhyming only. Not thought was put into them. In 9th grade, I think I did something similar. For no reason, there's internal rhyme of "new/shrew". Then, the "What would you do?" for the couplet. Which seemed to be plucked from the air and inserted because the poet had no other good ideas.

But back to the beginning--the first rhyme. That's the first hint that this poems is going to be filled with rhymes for the sake of rhymes and nothing exciting or new or surprising (except surprisig in how bad it is). Stone by stone, body by body in the grass...I am never given any reason why this is related to marriage. But this sets me to thinking, I don't make things concrete in a lot of my poems--my metaphors are left to interpretation often. BUT, this poem has what was talked about in a workshop, what was defined as a "contract". The first line could take us done the road of abstraction and how do I want to say this...symbolism? Or something like that. Since this is a draft, I can just leave it for now. Anyway, that's what it could do. However, the rest of the poem is just these incongruous, pat, disconnected (DISCONNECTED is the key word here) images.

How is marriage a trading of a lone compass for bodies and stones next to each other in the grass?

Why are you swans? In glaze-light? (Of a kiln?)

With arms? That get kilned together?

And then newly become a vessel-vassal. I mean wtf is a vessel vassal anyway?

Vassal: A man who promised to be loyal to his lord in return for protection and land

Vessel: a tube in which a body fluid circulates; a craft designed for water transportation; an object used as a container (especially for liquids)