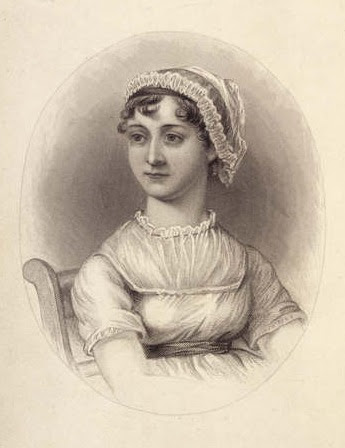 Have I mentioned that I'm obsessed with Jane Austen? If I haven't, but you read this blog regularly, then you probably already knew this. But, yes. I love her dearly.

Er in came over a few weeks ago and we watched "Becoming Jane" on On Demand (brilliant little invention really). Many critics panned it, but they're the same ones who would pan any chick flick because of its chick-flickiness.

Have you ever noticed that only the movies that bend out of the genre are the ones that get the good reviews? Juno is a high school flick but with a sophisticated, pithy heart. Knocked Up is a goober guy comedy, but with a sweet and tender twist. Bourne Identity is an action film but with more intellectually complex characters and character development.

I mean, of COURSE 300 suct balz, if you are a normal person who doesn't like special effects and fighting and ogres being violent and blood and guts. But if you DO like that, if that's your thing, shouldn't the movie reviewer review the movie based on how well the movie fulfills the genre?

That tangent being established, for a chick flick, "Becoming Jane" is quite delightful. We've got forbidden romance, gallavanting around England, tensions within a mostly happy family, a touch od scandal, a ball (there must always be a ball!!!). But there's also seedy displays of pugilism followed by propositions from the wearers of merkins (google it), for a twist. And, the most important part, an independent chick who forges her way through the world despite the man trying to get her down. In a 1800s type way, of course.

That's why I was so flattered yesterday when Gramma said, "You remind me of Jane Austen." Apparently the obsession runs in the family, for Gramma, too, just watched all the PBS series and can reread the novels to no end. I've already watched "Becoming Jane" twice and it's one I'll watch every time it's on TNT of Lifetime or Oxygen or whatever.
artsy stuff authors commonplace book in the pines Jane Austen movies and film