I'm at the Cape House. It's fun, as ever, but funny -- to be here with grad school friends, instead of people I've known since elementary or junior high school.

We had a nice time walking the beach, going to the Kreme N Kone, buying food for a delicious, Christmas Day like dinner and then a vair vair "cadddggjjj" (as in casual) reading of notes from our notebooks.

This is such personal stuff! The unrevised notes from our notebooks. And, with the help of Smirnoff or Tanqueray, we freely espoused. This is the magic of being in those places where one can be so "New Englandly". (That quote's only mildly taken out of context.) That is, open--and widely so.


In the spirit of such business, I will share the following:

For the month of April, a separate group of people from Stonecoast, also including myself, have been posting a poem everyday, for our [annoying, & lets-face-it: derogatory] poetry month.

While driving down to the Cape yesterday, I listened to a podcast I'd downloaded the night before. It was about Ezra Pound. Robert Harrison, of Stanford, interviewed Majorie Perloff. The podcast is titled "On the Poetry and Politics of Ezra Pound."

The last two poems I'd written and posted to the poem-a-day Stonecoast folks involved teaching the Greek epic "The Odyssey". (Admittedly, this was prompted by the un-admirable watching of "Troy" on AMC channel Wednesday night.) The Pound podcast and the Greek epic teaching poems catalyzed to be this new possible project I have just now conceived. Part came from listening to this podcast. The other part came from "the Odyssey-and-now-and-when-I-was-a-teacher."

The last time I taught The Odyssey, the idea of a long war was unfathomable to me & my students. Right after we finished, or while we were finishing the epic poem, the war in Iraq began.

Five years later, I have former students who are soldiers, seaman, Marines, etc. -- several who have served in Iraq. To us--the young teacher, the eventually military serving students, their civilian friends--the idea of a many-years-war - even with September 11 - was literally unfathomable. Their parents had nothing to do with Viet Nam. My father had, but only at the very very very end; he was anathematic. We didn't think the 3000 year old story we'd studied would have any political resonance (years, months, weeks -- depending on the school where I taught the classic) after we'd studied it.

But it does. So, while listening to this podcast -- after writing some poems about teaching the Greek epics, before those tales had concrete meaning, & after, when the tales would have so much more resonance now if the same people were in the classroom where we explored the epic tales the first time around -- I drove to Cape Cod and grabbed a pen and some scrap pieces of paper and wrote:

Pound wrote Cantos for World War I dead --
4000 now -- mothers, sisters, wives, brothers, fathers, daughters, sons, husbands...teachers
-------born in 1978
[then I decided to write about the people my age, deceased from the Iraq War. I look up from driving and taking notes and listening to the podcast and see--]
"Ezra's Path Rd, Dennis Port, MA" [serendipity]

With all this preface, I have these lines to share. --This is the second draft. DRAFT DRAFT DRAFT is the keyword, so if you don't like it, please don't judge. I'm open to constructive criticism.

Crap-in-heaven, thass alotta prefacing. Can you tell I don't like sharing, especially so early in a poem? After all that, here, then, is the first one:

Song One: One Degree (John Adamouski) 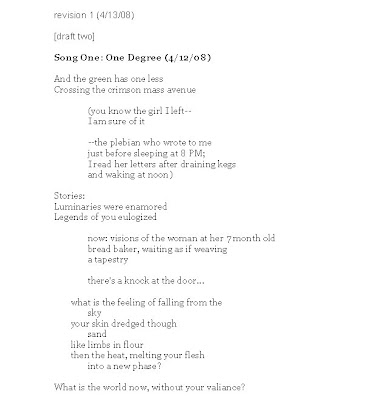 Here, for your curiosity, is the google result for the Cantos -- go the original for the best representations.
All Poetry Posts artsy stuff commonplace book ezra pound in the pines inspiration literary criticism poets writing