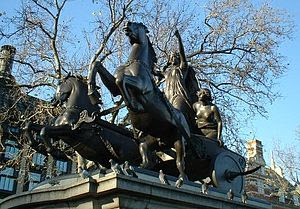 So, I was working from home today (to make up for Monday's sick day) and had the History Channel on to keep me focused (whether it's NPR, music, or historical documentaries, I work better with "intelligent" distraction). 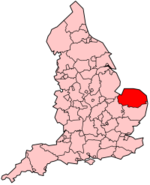 The History Channel was broadcasting a two hour documentary on Boudica, a Queen from 60 AD England, who ruled over Iceni, on the East coast of the island. After her husband died, power went to her. Back then for the Britons, power passed from man to woman, father to daughter, etc. without any hullabaloo. Like the titles do now. But not like they did from 800-1563 and most of 1603 to the Windsors. If you don't know what I'm talking about take a look at this monstrosity of a Royal British family tree and notice that from 1563 to 1603, England was ruled first by Bloody Mary then by Queen Elizabeth I.

Anyway, the Romans thought that a woman ruler was absurd (much like the assinine Democratic voters who don't/didn't vote for Hillary just because she's a woman - I heard a few on NPR and it made my fists ball) and seized all of Boudica's kingdom for Rome, tied her up when she was defiant and flogged her in front of her people while Roman soldiers took her daughters away and raped them.

This, as you can imagine, did not sit well with the Queen, so she became a Warrior Queen and launched an attack with 50,000 Britons - men, women, teens, elderly - on Roman settlements throughout England. They decimated one village then headed to Londinium - which is now modern day...you guessed it, London. However, hearing of the formidible Warrior Queen, most of London had been evacuated. Those that left behind met the same ill fate (to use words those documentaries always like to use) as the people at the previous Roman settlement.

Anyway, eventually this Roman army leader a-hole guy Minipenisium, or something like that, faced her on the road from London to west Britain and defeated her fighters. She disappeared - but probably died by poisoning herself, as did her daughters.

The wiki entry also had this juicy nugget :

"There is also a long-lived urban myth that she is buried under Platform 8, 9 or 10 of King's Cross railway station in London." Maybe she buried between 9 and 10 at PLATFORM 9 AND THREE-QUARTERS. (I wonder who else knows this little tidbit?)
artsy stuff Boudica commonplace book history in the pines