What You Have Not Taught, or About Elvis

Parents: Don't Forget to Teach Your Children about Elvis Presley 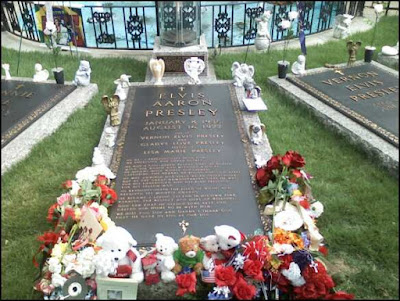 This is the story of one of the funnest times I've had in a while. (browse Elvis stamps here)


Parents, please don't forget to teach your children the things you think they'll just know upon birth. Things like the pain of Red Sox fandom until 2004, "This Land is Your Land" by my fellow Bastille Day birthday mate, Woodie Guthrie, and, most especially in this case, the importance of ELVIS!!!

Case in point: my friends Sadie and Jay's dog is Elvis. During dinner at their house once, their eldest daughter Celia and I were sitting next to each other at their kitchen table and she said something like, "Elvis is leaving the room." Which made me think of "Elvis has left the building," especially because the previous day was Elvis's 30th death day anniversary. So I said, "Celia, do you know who Elvis is?" And she said, "The dog, Bridget." And I said, "Yes, but do you know the person that Elvis-the-Dog was named after?" And to Sadie and Jay's terror, she didn't.

The shame! The horror! The neglect!

So I said, "Elvis was a singer. A great and famous singer. He is world famous. And he sang really good songs and dressed really cool. He had sunglasses, like these."

And I pulled my rhinestone encrusted giant shade sunglasses (from Old Navy) out of my purse and put them on.

Then Jay, who had acted quickly upon hearing that he had forgotten for the last 4 years to teach his eldest daughter--a destined entertainer in the same capacity of Elvis--about this vital piece of Americana, had seized his Elvis double CD--purchased almost twenty years ago--and popped it into the CD player. First we mellowed out to Elvis's "Fever" and Jay showed Celia the CD booklet. Oh-my-God. It was so funny. 'Cause Jay said, "This is the first Elvis. The Elvis we named Elvis-the-dog after."

And the moment Celia saw Elvis-the-Elvis, it was priceless. She stared intently at that swarthy side-burned, high cheek boned hunka hunka burnin' love and =snap!= Instant crush. "That's Elvis?" she said, then ran her finger along his Prince-Phillip-from-her-favorite-movie-Sleeping- Beauty-like jawbone and--I'm not kidding--swooned like a 50s teenager swooned over...well, Elvis.


Then Jay played "Blue Seude Shoes." This was Rocco's, Celia's 2 1/2 year old brother, moment to shine. For Rocco can seriously seriously d-an-cah. As did Fiona, the one year old.

And Fiona, Rocco, Sadie, Jay, Celia, me and even Elvis-the-dog, twisted, hip shaked, swagger-shimmied and kung fu kicked--Sadie doing this the best being a black belt Sensei--to the greatest of the Elvis's hits.


This is why people have children.

I can't wait until I'm old enough to, too.

The following post was originally posted on one of Bridget Eileen’s old blogs: In the Pines, Neophyte Poetics, Bridget Eileen’s Commonplace Book, Dreaming Bridge Designs or A Vegetarian Notebook. They aren’t all fancy with photos and subheadings and search descriptions, or even that much content, sometimes. They’re here for posterity, because it’s fun to read the archives!